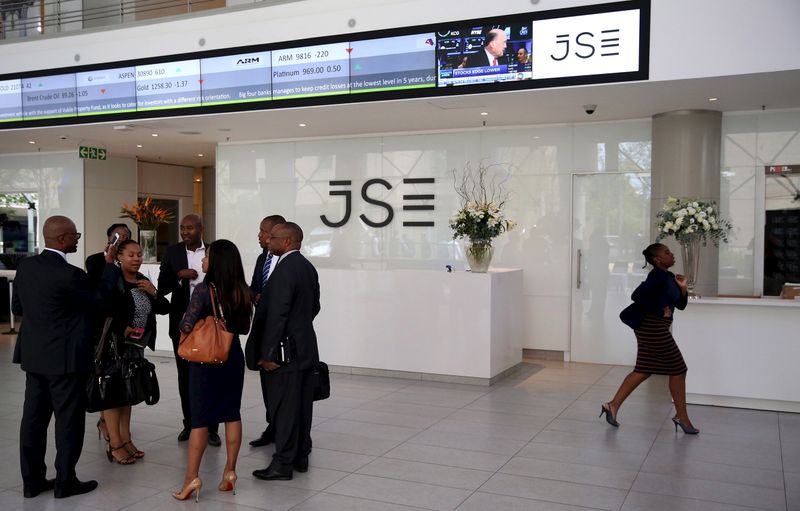 © Reuters. People chat in front of a reception with an electronic board displaying movements in major indices at the Johannesburg Stock Exchange building in Sandton Johannesburg

LONDON (Reuters) – Even if the pandemic-related debt explosion can be managed by the world’s biggest economies, last week’s bond market ruckus put large swathes of the developing world on notice yet again.

Worryingly, there are some fears the episode may signal far more than another tactical retreat by financial traders and could potentially mark an era-defining shift in the debt calculus for some of the biggest emerging economies.

Much like evidence of an unequal COVID impact within western economies, 2020 raised obvious concerns about a disproportionate hit to poorer emerging economies most reliant on travel, trade and commodities and with weaker health systems.

Countries with already heavy debt burdens also had, unlike the major economies, limited ability to simply print their own currencies to fund those debts for fear of exchange rate crises stoking inflation and foreign investor strikes.

A flooring of Western borrowing rates and a sharp weakening of the U.S. dollar alleviated the bind for countries with hard currency borrowing and market access – as did the yearend investor rush to rotate into the most beaten-down assets to anticipate a vaccination-led global bounceback.

But the resilience of the dollar this year against an overwhelmingly negative consensus and last week’s surge in benchmark U.S. Treasury yields – as traders try to price an exceptional, stimulus-led rebound in nominal U.S. growth of up to 10% this year – saw many banks raise red flags once again.

U.S. banks JP Morgan and Morgan Stanley (NYSE:) and others rushed to warn about a hit to emerging currencies akin to 2013’s ‘taper tantrum’ in Treasuries, which preceded a slowing in Federal Reserve bond buying back then. It was an event from which many emerging markets have never fully recovered as tighter dollar credit was quickly followed by U.S.-China trade wars and long-term doubts about globalisation at large.

“The negative effects from the higher U.S. interest rates will overwhelm the positive effects coming from a higher U.S. growth rate and we may have just passed that tipping point,” wrote Eurizon SLJ hedge fund manager Stephen Jen, explaining a decision to turn pessimistic on emerging FX this week.

But Barclays (LON:) economists Marvin Barth and Marek Raczko think that tipping point may have many far reaching consequences.

Unlike the rebound from the global banking crash 12 years ago, rising real borrowing rates will likely hit emerging market debtors hard after a decade of falling potential growth and ebbing globalisation.

At the same time, they argue, international investors are fearful long-term rates are now so close to their lower limits around or just below zero that bonds provide much less of a hedge in portfolios if equities or riskier assets like emerging markets sell off sharply.

That leads to a pullback in riskier fixed income, including emerging bonds, in favour of a “barbell” approach of equities and core fixed income and cash, which itself reinforces changes to the relative value of safe haven currencies like the dollar.

As Jen points out, central bank bond buying in the euro zone and Japan has cut the amount of those government bonds open to investors and led to the share of U.S. Treasuries of available reserve currency government bonds to almost double to 63% over 20 years.

Barth and Raczko reckon the most highly indebted emerging countries would now suffer from a likelihood that the relentless decades-long decline in real or inflation-adjusted global borrowing rates – moves that offset the steady decline in trend growth worldwide – has reached the end of the road.

“The long debt cycle is coming to an end and the piper must be paid,” they wrote, adding that the historical asymmetry of the situation meant investors could no longer bet on “mean reversion” given the “irreversible shift” in risks and portfolio preferences.

The Barclays team said the pandemic has set off alarm bells in models on the sustainability of countries’ overall public and private debts – models that hinge on a net savings calculation.

“The dynamics that supported sustainability in the last decade may no longer be feasible.”

Their model shows South Africa, Brazil, Peru, Colombia and Greece as “clearly unsustainable”, while Mexico, Russia and Turkey were on the edge. They said that can already be seen in relative currency moves since 2019 as well as in the slope of interest rate swaps market curves.

Potential growth in emerging markets peaked in 2012 and has been falling since, they estimate, while slowing population growth and a technology-driven death of the business ‘outsourcing’ trend would likely erode it further in the years ahead.

The only way to manage the debt in that environment is either a sustained fall in real borrowing rates akin to that of the last decade – now unlikely – or a concerted national degenerating that damages cyclical growth, they concluded.

Of course, not all emerging economies are in that boat – giant China is clearly different, as are many East Asia and central European economies. And that further atomizes the always-suspect EM catch-all bloc.

At the very least, it’s a reminder that despite the seeming nonchalance at blinding global debt accumulation over the past year, markets still fret about debt sustainability after all.