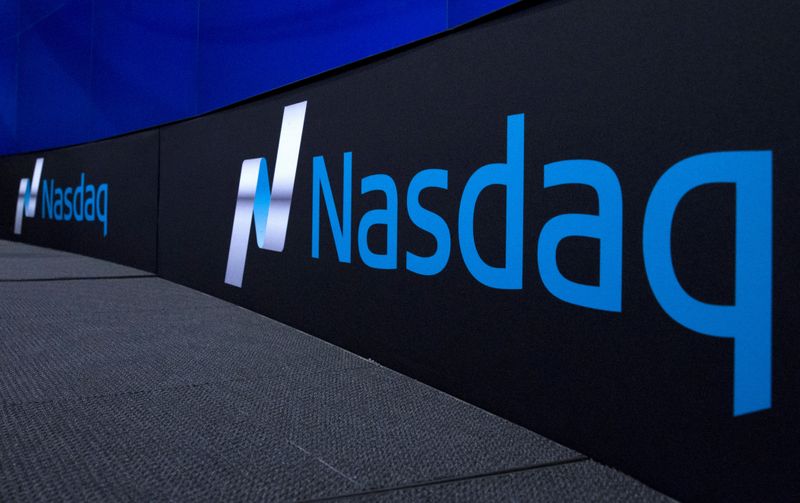 © Reuters. FILE PHOTO: The Nasdaq logo is displayed at the Nasdaq Market site in New York

NEW YORK (Reuters) – The blue-chip Dow powered to its fifth consecutive record high on Friday and the closed slightly higher as investors bought shares that should benefit from a strong reopening of the U.S. economy, an outlook signaled by rising yields in the bond market.

The tech-heavy Nasdaq tumbled after rebounding more than 6% over the past three sessions as the rising bond yields revived inflation worries and dulled the appeal of high-growth technology shares.

The S&P 500 and Nasdaq posted their biggest weekly percentage gains since early February after President Joe Biden signed into law on Thursday one of the largest U.S. fiscal stimulus bills and data reinforced convictions the economy was headed to a high-growth recovery.

The recent rise in U.S. Treasury yields has raised fears of a sudden tapering of monetary stimulus and put downward pressure on Wall Street in recent weeks.

The yield on the benchmark 10-year note hit 1.642% on Friday, the highest level since February of last year. [US/]

Boeing (NYSE:) Co rose 6.82% to lead the Dow and S&P 500 higher. The rising Dow and tumbling Nasdaq reflect an ongoing sell-off in tech as investors buy cyclical and underpriced value stocks that are expected to do well as the economy recovers.

But with the stimulus package the economy is likely to expand 7% to 9% this year and pressure interest rates, he said.

“That’s why you’re seeing rates rise today because the reopening is happening faster and stronger than anticipated. And that’s when value and cyclicals and economically sensitive stocks outperform,” Hayes said.

The speedy distribution of vaccines and more fiscal aid have spurred concerns of rising inflation despite assurances from the Federal Reserve to maintain an accommodative policy. All eyes will be on the central bank’s policy meeting next week for further cues on inflation.

U.S. consumer sentiment improved in early March to its strongest in a year, a survey by the University of Michigan showed on Friday.

The Nasdaq has been particularly hit by the sell-off in recent weeks and confirmed a correction at the start of the week as investors swapped richly valued technology stocks with those of energy, mining and industrial companies that are poised to benefit more from an economic rebound.

Value stocks added about 0.80%, while growth stocks slumped 0.62% in a continuation of a rotation that began late last year.

Tech, communication services and consumer discretionary indexes, which house these mega-cap stocks, slipped the most among major S&P sectors.

Ulta Beauty (NASDAQ:) Inc fell 8.4% after the cosmetics retailer forecast annual revenue below estimates, as demand for make-up products were under pressure due to extended work-from-home policies.

U.S.-listed shares of China-based JD (NASDAQ:).com Inc slid 6.7% after three sources said the company is in talks to buy part or all of a stake in brokerage Sinolink Securities worth at least $1.5 billion.

Advancing issues outnumbered declining ones on the NYSE by a 1.24-to-1 ratio; on Nasdaq, a 1.14-to-1 ratio favored advancers.

A guide to listing assets on Coinbase

Why do I have to complete a CAPTCHA? Completing the CAPTCHA proves you are a human and gives you temporary access to the web property. What can I do to prevent this in the future? If you are on a personal connection, like at home, you can run an anti-virus scan on your device to…
Read more