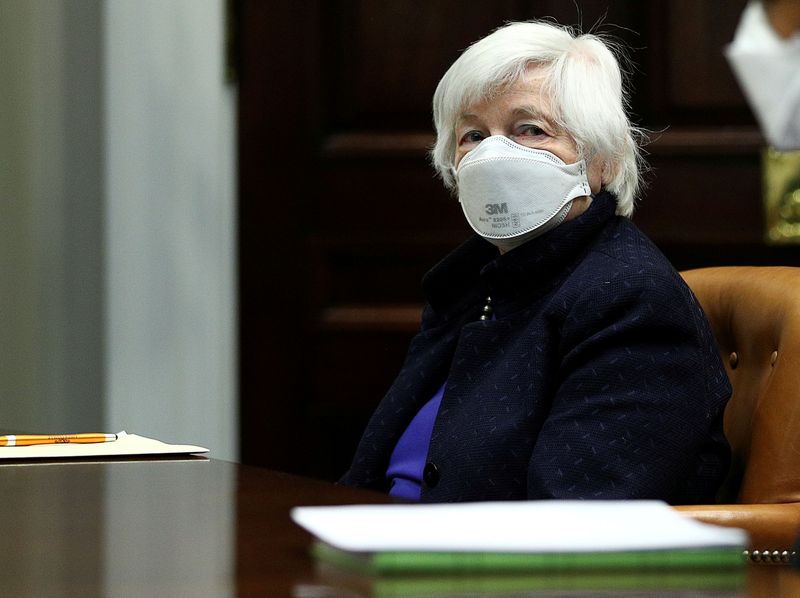 By Andrea Shalal and David Lawder

Yellen on Tuesday told leaders of the IMF and the World Bank that the Biden Administration had decided to “go big” with its COVID-19 response to avert the negative “scarring” impact of long-lasting unemployment, adding that she hoped the U.S. economy would return to full employment next year.

Speaking during the International Monetary Fund and World Bank spring meetings, the former Federal Reserve chair said the crisis had dealt a huge blow worldwide, and it was the responsibility of advanced economies to ensure that years of progress in reducing poverty were not reversed by the crisis.

“We are going to be careful to learn the lessons of the (global) financial crisis, which is: ‘Don’t withdraw support too quickly,'” Yellen said, “And we would encourage all those developed countries that have the capacity… to continue to support a global recovery for the sake of the growth in the entire global economy.”

The IMF on Tuesday said unprecedented public spending to fight the COVID-19 pandemic, primarily by the United States, would push global growth to 6% this year, a rate unseen since the 1970s.

Yellen said she hoped global finance officials made progress on approving a new allocation of the IMF’s emergency reserve, or Special Drawing Rights, during the meeting, and said it was critical to tackle global debt issues exacerbated by the crisis.

It was critical to ensure the world was better prepared for the next global health crisis, she said, citing the need to improve the resilience of supply chains and social safety nets around the world.

She said the core banking sector had been strengthened after the 2008-2009 financial crisis, but some areas in the non-bank financial sector “showed tremendous stress” during the pandemic and would require attention.

Yellen, who met earlier on Tuesday with the Coalition of Finance Ministers for Climate Action, also underscored the Biden Administration’s commitment to tackling climate change at home and ensuring the needed “transfer of resources” to enable similar actions in developing countries.

“We need to make sure that we help developing countries meet their climate goals along with their development objectives. And the availability of green finance is critical to that,” she said, noting that addressing climate change would also bring opportunities for investment to the private sector.

IMF Managing Director Kristalina Georgieva said climate risks were a growing threat to economic and financial stability, and said the IMF was stepping up its efforts to standardize reporting of risks, carry out stress testing and look at the role of supervisory authorities.

The Fund was also integrating climate-related risks in its financial sector assessments, while working with other organizations to increase data on carbon intensity and other climate risks in quarterly macroeconomic reports.

It was also working with countries to help them speed up their ability to integrate climate in their macroeconomic policies, she said.

World Bank President David Malpass said the bank was finalizing a new climate change action plan that includes a big increase in spending, building on record climate financing over the past two years.

Brazil ‘back to business’ in 2-3 months as vaccinations accelerate, economy minister says
By Reuters – Apr 06, 2021
1

By Jamie McGeever BRASILIA (Reuters) – Brazil’s Economy Minister Paulo Guedes said on Tuesday he expects the economy will be back on track in two to three months, as an…

WASHINGTON (Reuters) – The United States must invest heavily in its workforce, infrastructure, research and development remain competitive and stay the world’s largest economy,…

WASHINGTON (Reuters) – Community bankers think of themselves as having a keen sense of the economic pulse in the cities, towns and rural areas where they do business, and if that…

Chia miners are behind the current SSD shortage in Asia

Miners in the Chia Network have allegedly caused the shortage of high-performance solid-state drives (SSDs) Miners have clustered on the Chia Network and consequently led to a shortage of SSDs as per the latest reports. The development comes as Chia gears up for its official release to users.  The scarcity has made sellers of SSDs…
Read more
Business

BTC price bounces to $55,200 after huge sell-off but bears could still sink it to support above $51k Bitcoin’s price has bounced off lows of $53,400 after bears attempted to send it to yesterday’s lows of $51,540 — the lowest price level for BTC since 26 March. As of writing, the BTC/USD is looking to…
Read more
Business

eToro introduces Chainlink and Uniswap to its platform

Digital assets exchange platform, eToro, has announced the addition of new crypto offerings in Chainlink (LINK) and Uniswap (UNI) The social trading platform, eToro, yesterday confirmed it had added Chainlink and Uniswap to its list of offered tokens. The overall crypto market has seen tremendous growth in the last few months, and eToro has been…
Read more